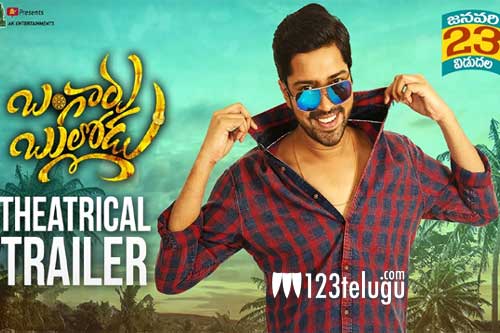 It is a known fact that Allari Naresh is doing a comedy film after a very long time. Titled Bangaru Bullodu, the film is being produced by Anil Sunkara. The makers released the trailer today.

Set in a small town, the film showcases Allari Naresh as the bank employee who gives gold loans. This aspect of the story has been nicely set through the visuals.

The presence of noted comedians like Prudhvi, Vennela Kishore, and Praveen elevates the proceedings. Touted to be a small-town comedy caper will simple emotions, the trailer looks fun and gives the good vibe of films that Allari Naresh used to do.

Directed by Giri, Bangaru Bullodu is up for a release on the 23rd of this month. For now, the trailer looks interesting.