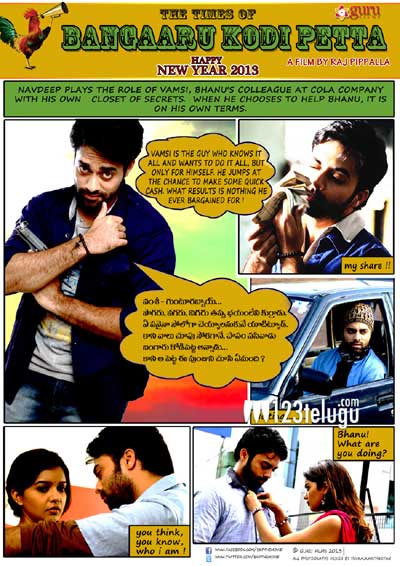 Bangaru Kodipetta, an upcoming film starring Navdeep and Swati, is grabbing a lot of attention on the internet, thanks to its innovative promotional campaign. Instead of sending regular updates about the film’s progress, the film’s makers decided to introduce the film’s characters like those seen in comic books which have a brief introduction about the scene and couple of dialogues. Even the film’s regular progress updates were made in similar style. Swati plays the
role of an ambitious girl named Bhanu who wants to become rich and she’s willing to take any risk. She works at a cola company and there she meets Vamsi, a role which is played by Navdeep, who chooses to help her. Raj Pippalla has directed the film and Sunitha Tati has produced the film under Guru Films banner. Mahesh Shankar has scored the music. The film is expected to release in February.