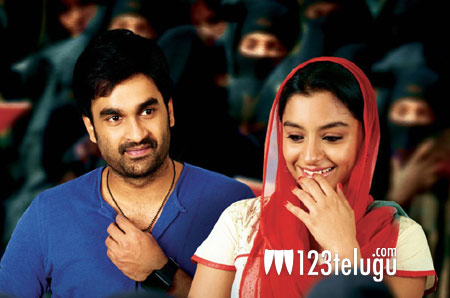 Chaitanya Dantuluri’s upcoming film Basanti is gearing up for release soon and he has begun promoting the film in a big way. Gautam, son of Brahmanandam, has played the lead role in this film and Alisha Baig is his co-star. Chaitanya has also produced the film under ‘Start Camera Productions’ banner.

The film’s trailer was officially launched by Mahesh Babu yesterday on the sets of Aagadu and it was shown in theatres across the state couple of days ago. Now, the trailer will be unveiled on the internet and TV channels later today. In the film, Gautam plays a college goer who’s deeply in love with a girl from his college; however, he gets into a huge problem one fine day. The film’s story has a terrorism backdrop and going by the trailer, it’s quite clear that Gautam will have an action packed role.

Mani Sharma has scored the music. The audio will be launched soon and if all goes well, the film might hit the screens later this month.