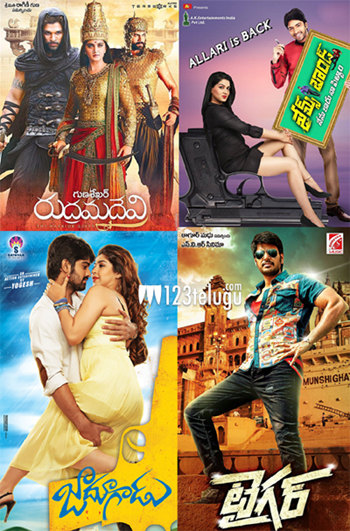 After a long lull with hardly any impressive releases since a long time, things are finally heating up for film trade. This 26th, movie lovers will witness a battle between several new releases. Already, Gunasekhar’s highly awaited historical epic Rudhramadevi is in the June 26th race, followed by Allari Naresh’s comedy entertainer James
Bond.

Not stopping here, the contest only got intense with the latest addition of Sundeep Kishan’s Tiger and Naga Shaurya’s Jadoogadu. Apart from these, Aadhi Pinisetty’s Malupu is also said to be gearing up for a 26th June release. After facing several financial and other related obstacles, most of films in the list could not see a release in early June even though they were ready long back.

With biggies like Baahubali and Srimanthudu vying for a July battle, the makers of these films are in a hurry to position their films to cash in on the heat.