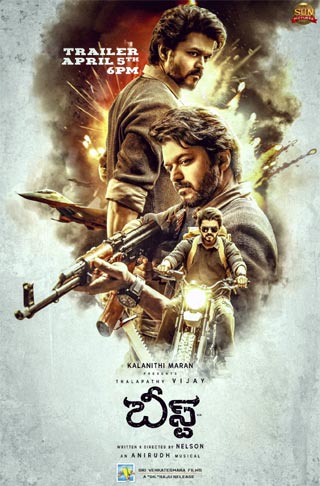 Kollywood star hero Vijay-starrer Beast is gearing up for a grand release on April 13, 2022. The makers have released the theatrical trailer yesterday and received huge attention from the audience.

Now, the latest info is that the Telugu version of Beast will be released by Dil Raju under his home banner, Sri Venkateswara Creations. The production house took to social media and announced the same. Also, it has been mentioned that the Telugu trailer will be out on April 6, 2022, at 6 PM.

Pooja Hegde is playing the lady love of Vijay in this action entertainer. Directed by Nelson Dilipkumar, the movie is bankrolled by Sun Pictures on a grand scale. Anirudh Ravichander has composed the music for this movie.