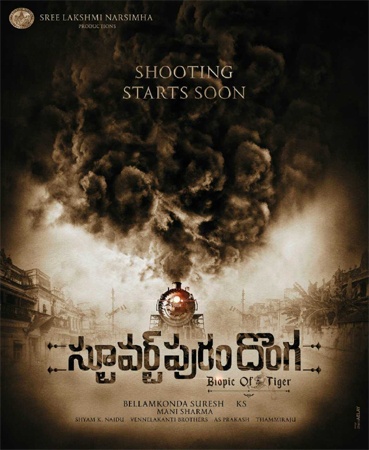 It is a known fact that Bellamkonda Sai Sreenivas is making his Bollywood debut with Chatrapathi remake.In the meantime, Bellamkonda has signed another exciting project and it is announced officially through the title poster.

Titled Stuartpuram Donga, the film is a biopic of ‘Tiger’ Nageswara Rao, a notorious and courageous thief of Stuartpuram in the 1970’s. Coming to the title poster, a steam train can be seen emitting smoke, as it passes a village, perhaps Stuartpuram.

Mass director VV Vinayak’s protégé KS will be helming it as his debut directorial venture, wherein producer Bellamkonda Suresh is making a comeback to film production.

Melody Brahma Mani Sharma will score music. Shyam K Naidu handles the camera, while Thammiraju is the editor and AS Prakash is the art director.