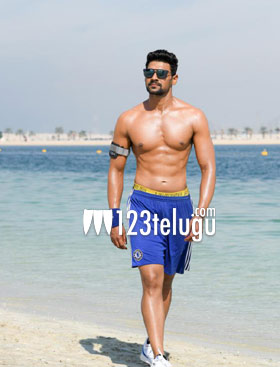 Young hero Bellamkonda Sai Sreenivas has been mostly doing action oriented commercial films since the beginning of his career. His upcoming movie ‘Saakshyam’ too falls under the same genre. But this time, Sai has put in a lot of effort.

For the first time, Sreenivas will be seen sporting six-pack abs in Saakshyam. Apart from developing a neatly toned body for his role, Sai also learned flyboarding, jetsking, sandboarding, desert biking, atv riding and BAM cycling for 15 days in Dubai. The film will have 5 high-octane action episodes and Sai took a lot of risk performing them.

Saakshyam stars Pooja Hegde as its female lead. Sriwass has directed the film and Abhishek Nama has produced it. Saakshyam is hitting the screens on July 27.