Bellamkonda Sreenivas’ new film announced on his birthday
Published on Jan 3, 2019 8:12 am IST 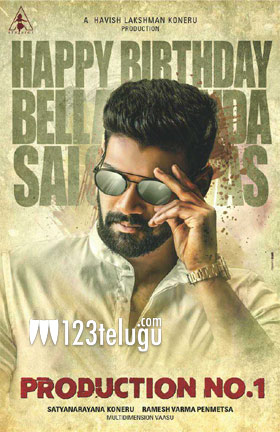 Today, young hero Bellamkonda Sai Sreenivas celebrates his birthday. On this occasion, the makers of his next film have made the official announcement this morning. Touted to be an action entertainer, the film will be directed by Ramesh Varma.

In this as-yet-untitled film, Bellamkonda Sai will be seen sporting a new look. The announcement poster has Sai looking stylish in a beard. This is the first time that the young hero will be seen in a beard on the screen.

Satyanarayana Koneru and Havish Lakshman Koneru will produce the movie under A Studios banner. Multi-dimension Vasu is presenting this yet to be launched film. More details will be out soon.