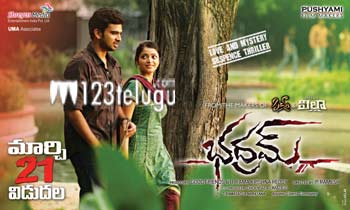 Ashok Selvan, Janani Iyer starrer Bhadram is off to a good start at the box-office. Directed by P Ramesh, the film is the dubbed version of a Tamil film, Thegidi and it’s easily one of the very dubbed films which has received good response in recent times. Good Cinema Group and B Ramakrishna Reddy had produced the Telugu version.

The film is particularly doing quite well in ‘A’ centres and multiplexes. The makers are confident that the film will continue its good run at the box-office over the next few days. After extensive promotions in Hyderabad, the lead cast will be visiting theatres in Vizag and Vijayawada later this week to meet the audience. In the past, Good Cinema Group had promoted all their films extremely well and they are doing it again for Bhadram. The film revolves around the life of a young man, who wants to be a detective, and how he tries to save the life of a girl he’s in love with.

Nivas K Prasanna has scored the music and Dinesh Krishnan is the cinematographer.