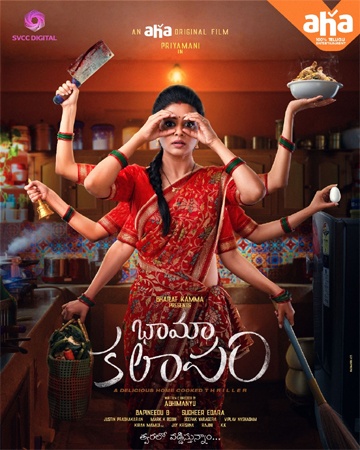 National award-winning actress, Priyamani, is all set to make her Telugu OTT debut with a web movie titled Bhama Kalapam.

Produced by SVCC Digital, the movie’s first look poster has been released today. The poster is so intriguing and colourful. In the poster, Priyamani resembled goddess Durga by holding different things. She played a homemaker in Bhala Kalapalam.

Billed to be a fascinating comedy thriller, the movie is directed by Abhimanyu Tadimeti. Bharat Kamma of Dear Comrade fame turned showrunner while Radhe Shyam’s music director, Justin Prabhakaran is roped in to score music.

The makers didn’t reveal any info about the rest of the cast of Bhama Kalapam, which will premiere soon on Aha.