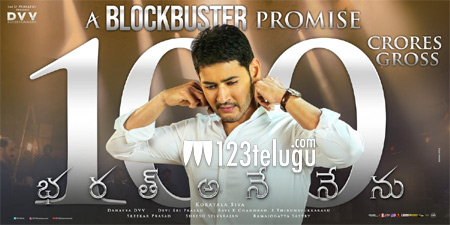 Looks like there is no stopping Mahesh Babu’s Bharath Ane Nenu. Within no time, the makers say that the film has grossed 100 crores are the box office.

Back home in the Telugu states and in the overseas, the film is doing exceptionally well. Today, being Sunday, the film is set to do quite well with packed occupancy all over. In the US, the film has already crossed the 2 million mark and is going super strong in many locations.

Koratala Shiva directs this film which has Kirara Dvani as the female lead. DSP scores the music.