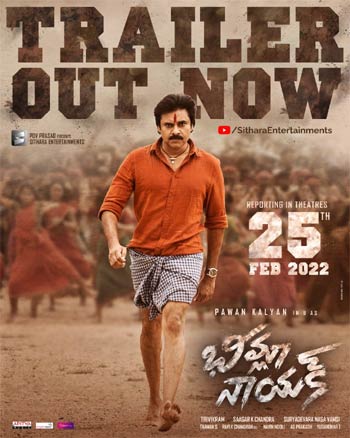 The day which we were all waiting for is finally here. The much-awaited trailer of Pawan Kalyan and Rana’s Bheemla Nayak is here and it looks stunning.

What catches your imagination is the BGM that Thaman has given. The manner in which Pawan is introduced, his screen presence, body language and intensity are stunning.

Rana is also no less and is showcased in a solid manner. All those who were missing Rana in the previous promos will just love him in the trailer. By the looks of it, the film is going to be high on the confrontation scenes between Pawan and Rana.

The visuals, local setup and action blocks are also good. Pawan’s fans will have a blast for sure in the theaters and this trailer has only increased the hype for the film.