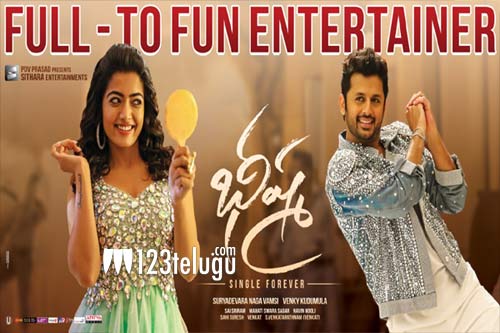 Nithiin and Rashmika Mandanna’s romantic entertainer, Bheeshma, released on Friday to a unanimous positive response from all quarters. The film is having a solid run at the box-office worldwide.

In the US, Bheeshma is performing exceedingly well in almost all the centres it released. After a decent start with the Thursday night premieres where it grossed $94,744 from 143 locations, the film witnessed a huge push on Friday and ended up grossing $151,697 from 144 locations. And on Saturday, until 10:15 pm EST, Bheeshma collected a whopping $234,564 from 136 locations.

With a gross of $481,005 so far, Bheeshma is all set to enter the half-a-million-dollar club by the end of Saturday itself. Stay tuned for more details on the film’s daily box-office collections.