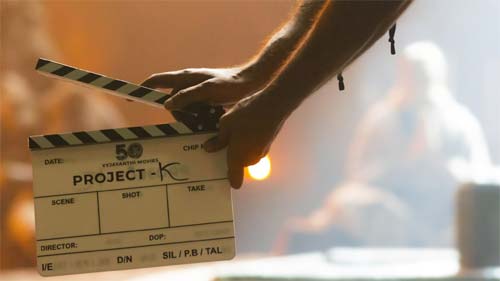 In what can be termed one of the biggest collaborations in Indian Cinema, leading stars Prabhas, Deepika Padukone and legendary Bollywood actor Amitabh Bachchan have joined forces for the highly-anticipated sci-fi thriller, Project K. The film’s first schedule commenced today work a formal puja in Hyderabad.

As he graced the muhurat ceremony and gave his first shot for the movie, with Prabhas sounding the clapboard, Amitabh said that it’s an honour to be behind the clap given by Prabhas, the “icon that created cinematic magical waves throughout the country and the world with Baahubali.

On the other hand, Deepika took to Instagram and said that she is
absolutely thrilled for what’s coming ahead.

Project K is being directed by Nag Ashwin and produced by his father-in-law and veteran producer Ashwini Dutt. Mickey J Meyer is composing the soundtrack.

T 3976 – .. for the Mahurat shot of #ProjectK .. what an honour to be behind the clap being given by the icon that created cinematic magical waves throughout the Country and the World with Bahubali #actorprabhas @deepikapadukone @nagashwin7 @VyjayanthiFilms pic.twitter.com/xxOhZKjmds