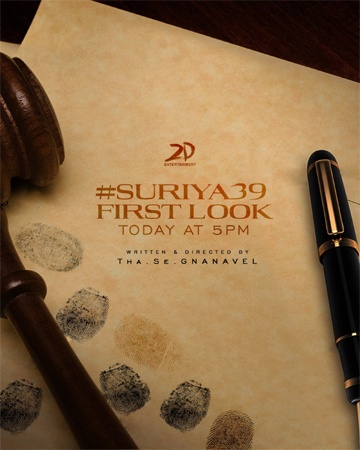 Even as fans are thrilled with the terrific and massy first look and title reveal teaser for Kollywood star Suriya’s 40th film, here comes a big surprise. The makers of Suriya’s 39th film will be releasing the first look poster this evening at 5 PM, on the occasion of Suriya’s birthday.

Suriya39 makers unveiled a special announcement poster this morning. The striking poster features a white paper, a vintage fountain pen, a wooden gavel and several thumb impressions, hinting that the film is going to be an intense courtroom drama.

Suriya39 is being directed by Tha. Se. Gnanavel. The film also features Prakash Raj and Karnan girl Rajisha Vijayan in lead roles. Suriya himself will be bankrolling the project under 2D Entertainment banner Sean Roldan will compose the music. Stay tuned for the first look.