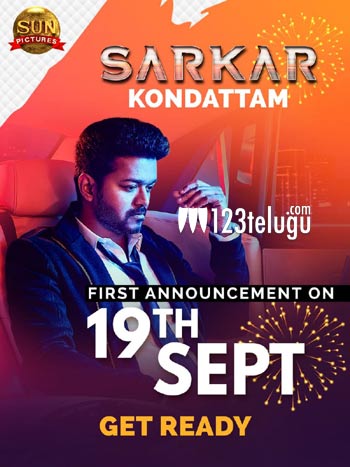 Much to the joy of the fans of Tamil star Vijay, the makers of the actor’s most eagerly awaited political thriller, Sarkar, suddenly released a surprise poster this morning. The poster reveals that a big update on Sarkar will be out on September 19 at 11:00 am.

Within no time, Thalapathy fans began speculating that Sarkar’s first single or even the teaser release date could be out on September 19. The film’s entire shoot has been wrapped last week and the post-production work is underway in full swing.

In Sarkar, Vijay will be seen as the Chief Minister of Tamil Nadu. AR Murugadoss is directing this Diwali entertainer and AR Rahman is scoring the music. Keerthy Suresh is the film’s heroine. Sun Pictures banner is producing the movie with a high budget.