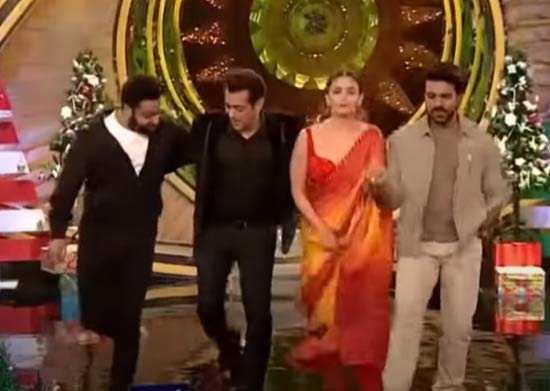 The team RRR is promoting their film restlessly in every possible way. As a part of that, Ram Charan, Jr NTR, Alia Bhatt and SS Rajamouli graced the most popular TV reality show, Bigg Boss 15, as the guests.

In a promo of the special episode, Alia Bhatt spoke a few words in Telugu. Besides, Ram Charan and Tarak taught Salman Khan, the host, the famous ‘Nacho Nacho’ step. Later, Salman and the RRR actors shook their legs together for the song.

The episode will premiere soon on the Colors channel. Scheduled to release on January 7, 2022, the pan-India movie will be released in 5 Indian languages.