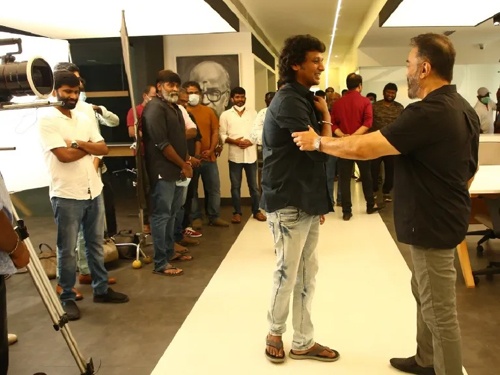 It is a known fact that Kamal Haasan is doing a film called Vikram in the direction of Lokesh Kanagaraj. The film has a dream casting of Vijay Sethupathi and Fahadh Faasil in lead roles.

The first look poster created a lot of stutter and today, the film has finally gone on floors. Kamal and Vijay Sethupathi took part in the shoot and one snap of the, behind the scenes, has gone viral.

Kamal Haasan plays a cop in this film which will be a suspense thriller. Fans are super thrilled and want to see how Vijay Sethupathi and Fahadh Faasil will be showcased alongside Kamal Haasan.