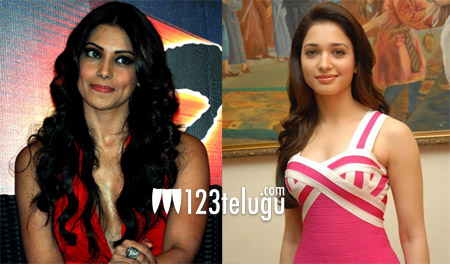 Yes! You heard it right. Bollywood starlet, Bipasha Basu is fuming over milky beauty Tamanna. The reason for her anger is that the entire unit of her latest film Humshakals has been giving Tamanna more priority over her.

Bipasha is working alongside Tamanna and Esha Gupta in the Sajid Khan film Humshakals. According to the unit sources, Bipasha is absolutely not happy the way that Tamanna is given huge priority, and has been chosen to promote the film.

Tamanna and director Sajid Khan seem to have found a dear bond, and have been seen promoting the film together. Some sources also say that as Tamanna did not get much recognition with her first film in Himmatwala, so Sajid is making sure that she gets her due this time around.

What ever the reason is, all this has not gone well with the senior actress, and she is making a huge hue and cry about this. Humshakals also has Saif Ali khan and Ritesh Deshmukh in lead roles.