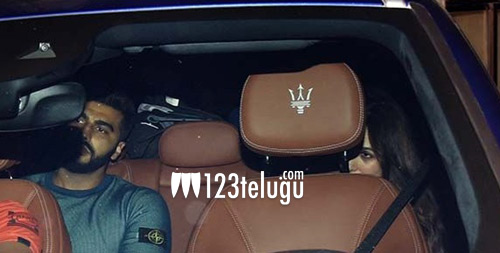 From the past one year or so, there have been several reports that Bollywood hero, Arjun Kapoor has been dating Arbaaz Khan’s ex-wife Malaika Arora. When asked about the same both the stars denied their relationship many a time.

But the Mumbai media has been spotting them at various events and visiting each other’s homes frequently. Looks like Arjun and Malaika have decided to make things official.

The stars were spotted arriving together in the same car for designer Sandeep Khosla’s house warming ceremony yesterday night. Going back in time, Arjun Kapoor was trained by Salman Khan and he was the one responsible for his entry into films.

The news is that Salman is not happy with Arjun’s closeness to Malaika and has been in no talking terms with the young hero. For those who don’t know, Malaika was married to Salman’s brother Arbaaz and also have a 17-year-old son.