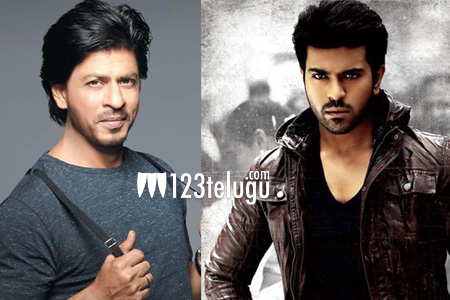 It is a known fact that Ram Charan is busy giving final touches to his upcoming project Bruce Lee. The entire unit who were busy canning the title song in RFC got a huge surprise as Bollywood star hero Shahrukh Khan made a sudden entry to their sets.

The star hero greeted everyone and even watched Ram Charan perform some crazy steps for the song. Rakul Preet Singh is cast as the female lead in the film which is directed by Sreenu Vaitla.

This is the second time that SRK had visited a Tollywood film shooting after making his presence felt on the sets of Brahmotsavam. Bruce Lee is produced by D V V Danayya and has music by S S Thaman.