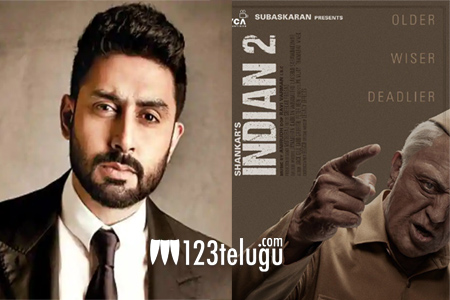 Shankar, Kamal Haasan’s Indian 2, which was launched recently, will reportedly have a popular Bollywood actor playing the negative role. Till recently, there were reports that Shankar had approached Ajay Devgan and Akshay Kumar to play the role; however, when both of them politely turned down the offer, Shankar is said to be in talks with Abhishek Bachchan.

In the past, Abhishek Bachchan had worked with Mani Ratnam for Guru and Raavan; however, both of them were primarily shot in Hindi. Now, it will be interesting to see if he agrees to come onboard Shankar’s film. Ever since he played one of the lead roles in Manmarziyan last year, Abhishek Bachchan has been approached for qyite a few interesting roles. He will soon be making his digital debut with season 2 of Breathe, which will air on Amazon Prime.

Indian 2 also stars Kajal Aggarwal in a lead role, and it will release in Tamil, Telugu and Hindi. Anirudh will be scoring the music, and the film’s shoot is expected to be wrapped up later this year.