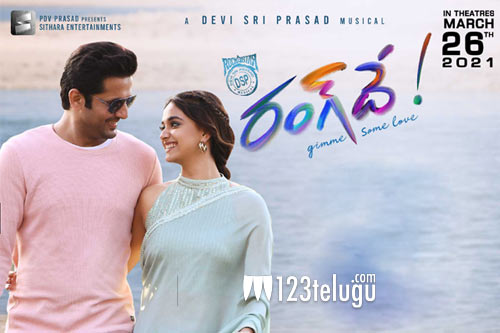 Nithin is back with yet another film called Rang De. The film will release this week and it has to become a hit as Nithin gave a flop in the form of Check.

The makers are working hard to keep the film in the news. A special event is going to be held today in Rajamahendrawaram to take the buzz for this film higher.

The pre-release business of this film has been locked to 22 crores in Telugu states and the film will have to make a solid start at the box office. Venky Atluri directs this film and Keerthy Suresh is the heroine.

As things have picked up well in the US as well, if the film gets a good talk, the collections will surely help the makers. For now, things look good, and let’s see how the film opens up.