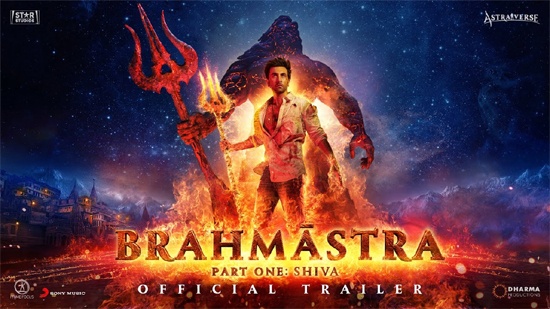 Finally, the most-awaited trailer of Bollywood’s upcoming magnum opus, Brahmastra Part One: Shiva is out now. Directed by Ayan Mukherji, the mythological action-adventure has the star couple – Ranbir Kapoor and Alia Bhatt – as the lead pair.

The trailer looks amazing and Chiranjeevi’s voice-over is so good. Shiva (Ranbir Kapoor) is a DJ who is enjoying his life and falls in love with a lovely girl Isha (Alia Bhatt). One day, he gets to know that he has a strange connection with the fire. Eventually, he comes to know that he is gifted and also one of the protectors of Asthras and he also comes to know that the destiny of Brahmastra depends on him.

The trailer looks spectacular. It showcases Ayan’s Astraverse in which Amitabh Bachchan, Nagarjuna and others played the protectors of Brahmastra. Mouni Roy plays the villain. Shah Rukh Khan also played a cameo in this biggie. The VFX, background score and production values are rich.

SS Rajamouli is releasing this movie in Telugu. Produced by Star Studios, Dharma Productions, Prime Focus and Starlight Pictures, the high-on VFX movie is all set to hit screens on September 9, 2022, in Hindi, Telugu, Tamil, Malayalam, and Kannada.