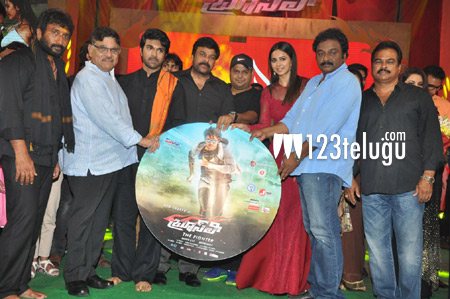 The audio of Ram Charan’s upcoming film Bruce Lee was launched a few hours in Hyderabad. Megastar Chiranjeevi graced the event and unveiled the audio album. VV Vinayak, Allu Aravind, BVSN Prasad, Sai Dharam Tej and few others were present at the event.

The film’s theatrical trailer, which was launched during the event, showcases what’s in store for the audience who are eagerly waiting for the film. By the looks of the trailer, the film promises to be a complete family entertainer with loads of action sequences. Charan is at his elegant best during the dances and action episodes. The background score is superb and the cinematography is top notch.

Directed by Sreenu Vaitla, the film has Rakul Preet as the female lead. DVV. Danayya is the producer for the film. SS Thaman is the music composer. The film is slated to hit the screens on October 16th.