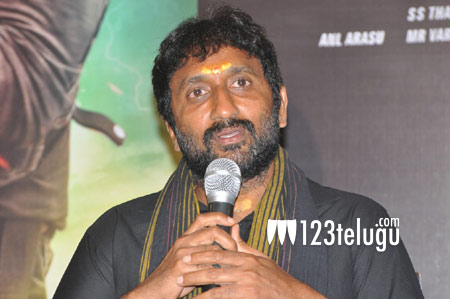 Ram Charan is fast finishing the shooting of his upcoming action entertainer, Bruce Lee, in the direction of Sreenu Vaitla. The current schedule is progressing in Hyderabad. Rakul Preet Singh is the female lead in the film. SS Thaman is the music director.

Taking to the media earlier today, Sreenu Vaitla made it clear that the film will hit the screens on October 16th. He said that Bruce Lee will showcase a different angle in Ram Charan’s acting and Chiranjeevi’s role in the film is like a teaser for his 150th film. He further stated that the Bruce Lee features all the elements required for a perfect entertainer and thus making it a film for all sections of audience.

Producer DVV Danayya thanked the entire team for working very hard to complete the film on time. He added that the film is being made on grand scale with lavish production values. He showered praises on Sreenu Vaitla and Ram Charan for giving their best for the film.