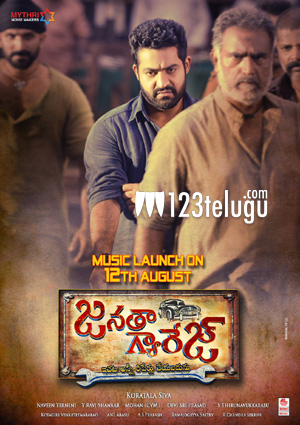 The audio album of Young Tiger NTR’s ‘Janatha Garage’ is going to be released on August 12th in Hyderabad and the event will be telecast on TV9 and NTV, according to reliable sources. The two channels have reportedly paid a bumper price to telecast the event, underscoring the craze for the film.

The movie’s audio album has been composed by Devi Sri Prasad and he is going to be a part of certain live performances at the venue. NTR and the rest of the Janatha Garage cast will be present at this grand event. Koratala Siva has directed this movie and Mythri Movies is the production house.

Mohan Lal, Nithya Menen, Samantha and Unni are some of the leading actors in the film.