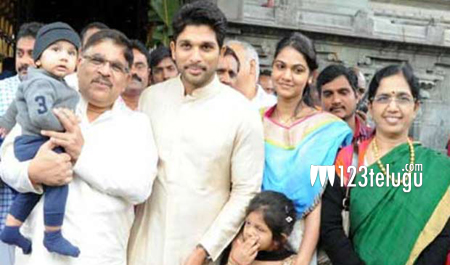 During their visit, Bunny and his family offered Ayaan’s hair to the lord. The Allu family also offered special prayers to Lord Balaji.

Allu Arjun and Sneha Reddy got married in 2011, and Allu Ayaan was born in April this year. Bunny is in the best form of his career, with ‘Race Gurram’ ending up as the biggest blockbuster in 2014.

The Stylish Star is now shooting for his next movie in Trivikram Srinivas’ direction. The film’s unit has taken a short gap after shooting some major action episodes in RFC recently.