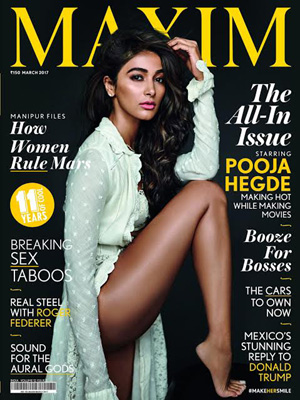 Pooja Hegde, who’s currently playing the lead role in Allu Arjun’s DJ, took everyone by surprise yesterday, thanks to a racy photoshoot. The actress posed for Maxim magazine and it’s quite obvious from the cover page that Pooja has revealed her most glamorous avatar so far.

DJ, directed by Harish Shankar, was recently shot in Abu Dhabi. A song was canned on the lead actors and buzz is that Pooja will be seen as an NRI in this full-fledged entertainer.

The film’s teaser went viral on the internet with almost 9.4 million views. Devi Sri Prasad has scored the music.