Bunny’s Hindi market increases by leaps and bounds
Published on May 7, 2017 9:47 am IST 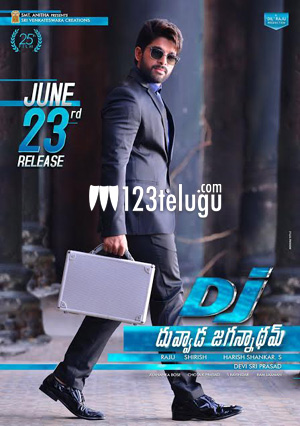 Allu Arjun’s Duvvada Jagannadham is a hotcake in Tollywood trade circles. Directed by Harish Shankar and produced by Dil Raju, the movie is slated to hit the screens on June 23. Apart from Tollywood, the Stylish Star enjoys a huge fanbase in Kerala.

Now, going by the ongoing trade reports, Duvvada Jagannadham’s Hindi dubbed version’s rights have been sold for a whopping Rs.7 crore. This is next only to Mahesh-Murugadoss’ Spyder’s Rs.28 crore and Pawan Kalyan’s Sardaar Gabbar Singh’s Rs.8.25 crore deals for the Hindi dubbed versions.

This only proves that Bunny’s market is spreading beyond Tollywood and Mollywood by leaps and bounds.