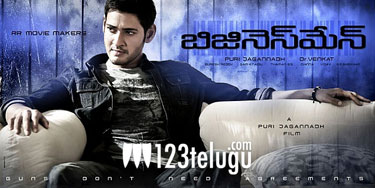 Prince Mahesh Babu’s Businessman is gearing up for a massive release on January 11th 2012 and the makers are looking at garnering record openings for the film. The film will see a release in maximum number of theaters both in Andhra Pradesh as well as in overseas territories to cash in on the craze surrounding this project. Mahesh Babu is fresh from the blockbuster success of Dookudu and there is a tremendous buzz surrounding this film as a result.

The movie has been produced by R.R.Movie Makers and they are distributing the film in most parts of Andhra Pradesh except in few areas like East and West Godavari as well as Vijayawada.

Businessman has Mahesh Babu and Kajal in the lead roles and Puri Jagan is the director. Music has been composed by Thaman and some of the tracks have already become chartbusters. The film is set in Mumbai with a Mafia backdrop.