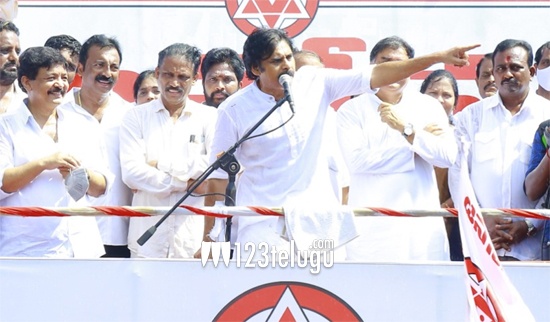 It looks like actor-politician Pawan Kalyan is totally fed up of the “Power Star and CM…CM” slogans during his public meetings. It seems Pawan is frustrated with the fact that his over-enthusiastic fans raise these slogans in his presence, but end up voting for the opposition parties in elections.

During his Sramadanam protest event on the Hukumpeta-Balajipeta earlier today, when fans again started shouting “Power Star” and “CM…CM” slogans, the Janasena President promptly asked them not to call him either Power Star or CM until they actually make him a CM and bring him to power.

“Let’s talk facts. What’s the point in calling me Power Star and CM when I am not in power? Just call me Janasenani and I’ll be happy with it. You may call me CM when you make me the CM,” Pawan told his fans.