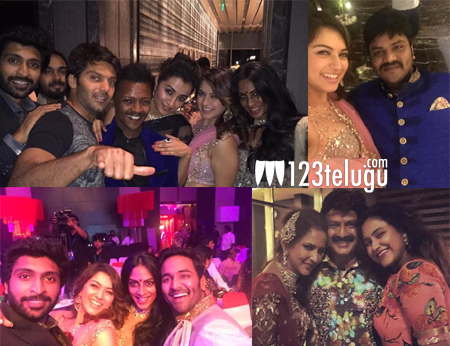 With just one day left for the wedding of Manchu Manoj with his lady love, Pranathi Reddy, the celebrations have started to zing up in the Manchu family. In yesterday’s Sangeeth ceremony at a star hotel, film stars of all the film industries down south and even Bollywood, some including the yesteryear stars, burned the dance floor down with their energetic moves.

However, the icing on the cake was the dance performances by the Manchu children, Lakshmi and Vishnu, who coupled with their life partners and performed to some hit songs. Finally, it was Mohan Babu who stole the show with his zest when he teamed up with Jayasudha,Sumlatha and Raveena Tandon to perform a few duets.

The Sangeeth ceremony was attended by numerous celebrities from film, political and the business worlds. The wedding will take place tomorrow (20th May) at 9:10 am in a traditional fashion.