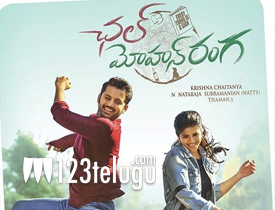 Nithin is going through a tough time as his last film, Chal Mohan Ranga opened to some very mixed reviews. Even though the film saw some decent collections in its first weekend, the going has been a bit tough since then.

The latest we hear is that the romantic drama has made $445,991 to date in the US. With Nani’s film releasing tomorrow and Mahesh’s BAN coming in a week later, things look quite difficult for this film.

Krishna Chaitanya directs this film which was produced by Pawan Kalyan and Trivikram.