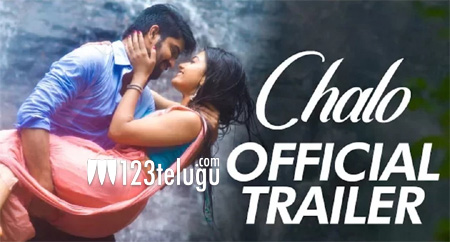 The theatrical trailer of young hero Naga Shaurya’s upcoming film, Chalo, is out and it’s fun from start to finish. The trailer showcases an intense feud between Telugu and Tamil people in a village named Tiruppuram which falls on the Andhra-Tamil Nadu border.

In Chalo, Naga Shaurya plays a Hyderabadi who joins an engineering college in Tiruppuram. What happens when he locks horns with the Tamilians forms the crux of the story. Chalo is hitting the screens on February 2. Kannada actress Rashmika Mandanna is making her Tollywood debut with the movie.

Chalo’s pre-release event will be held on January 25. Megastar Chiranjeevi will be the chief guest at the event. Debutant Venky Kudumula, a former protege of Trivikram Srinivas, directed Chalo, while Naga Shaurya’s parents Usha and Shankar Prasad produced the movie under Ira Creations banner. Mahati Swara Sagar is the music composer.