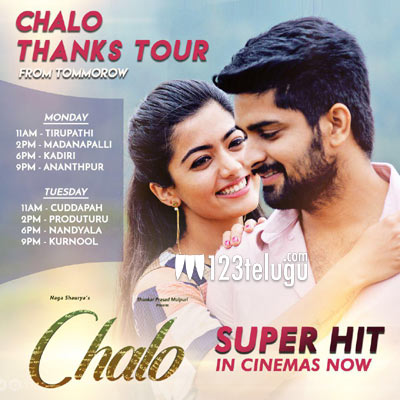 Naga Shaurya’s latest romantic entertainer, Chalo, released on February 2 amid an intense competition from Ravi Teja’s Touch Chesi Chudu and Anushka’s Bhaagamathie. However, the film is having a solid run at the box-offices in the twin Telugu states and in overseas.

Chalo is already inching towards the break even mark in most areas and trade circles are predicting that Chalo will be the biggest hit in Naga Shaurya’s career. To celebrate this grand success, Chalo’s team will be going on a success tour from tomorrow (Feb 5), starting with Rayalaseema.

Tomorrow, the team will greet the audience in Tirupathi, Madanapalle, Kadiri and Anantapur. And on Feb 6, the team will head to Cuddapah, Proddutur, Nandyal and Kurnool. More details regarding the success tour will be revealed soon.