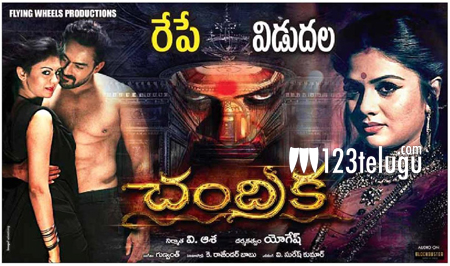 The much awaited horror drama, Chandrika has completed its censor formalities and obtained an ‘A’ certificate. Starring Karthik Jayaram, Kamna Jethmalani and Srimukhi, this film is produced by V.Asha under her Flying Wheels Productions banner.

Directed by Yogesh, the story and screenplay provided by Sajid Qureshi and graphics are said to be the main attractions of the film. Veteran actor Girish Karnad, L.B.Sriram, Thagubothu Ramesh and Satyam Rajesh play important roles in the film which is slated for release during this month end.