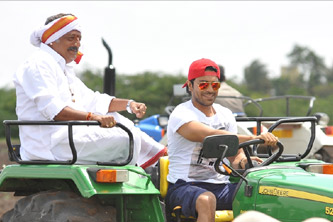 Ram Charan’s hugely anticipated film, ‘Govindudu Andharivadele’ is set for an grand October 1st release. According to our sources, both Ram Charan and Prakash Raj have worked really hard for this Krishna Vamsi directorial.

According to the inside reports, both these actors have put in extra efforts, and spent sleepless nights to bring out perfect emotions during the dubbing of this film. Reports also reveal that last 30 minutes is said to be the highlight of the film. Directed by Krishna Vamshi, this flick features Kajal, Srikanth, Jayasudha and Kamalinee Mukherjee in other prominent roles.