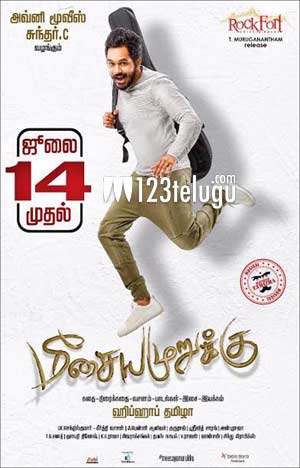 123telugu.com had earlier reported that Hip Hop Tamizha’s Adhi, the young composer who had scored a super hit soundtrack for Ram Charan’s Dhruva, is debuting as a hero. Titled Meesaya Murukku in Tamil, Adhi’s debut film is slated to release on July 14.

Apart from acting, Hip Hop Adhi has also made his directorial debut with this romantic entertainer. Aathmika is the film’s leading lady and Sundar C, who is helming India’s most expensive film, Sangamithra, has produced the film.