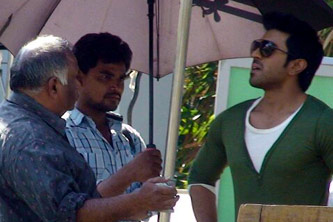 The shooting of Mega Power Star Ram Charan’s ‘Yevadu’ is going on at Medchal. Some comedy scenes are being canned and actor Raghu Karumanchi is participating in the shoot along with Charan. Shruti Haasan is the heroine in this movie. Vamsi Paidipally is directing this big budget production. Dil Raju is the producer.

Stylish Star Allu Arjun and Kajal Aggarwal will be seen in crucial roles in this movie. The film is expected to be a murder mystery and it will hit the screens in the second half of this year.