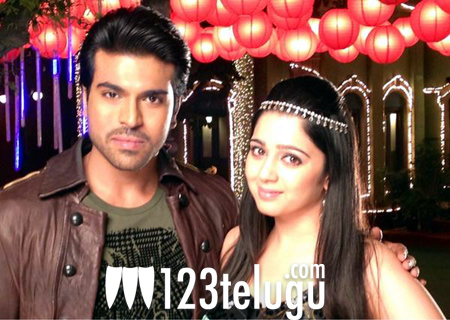 Ram Charan’s upcoming film Naayak is in the final stages of shooting. Currently, an item song from the film titled Nellorae, sung by Jaspreet and Suchitra, is being canned in Hyderabad and Charmee is going to be seen shaking a leg with Ram Charan in this mass number. “Ful nite shoot for #NAYAK … Having fun shaking legs vit Ram charan … Hope u guys make dis song too a hit .. Wait til Sankranti to watch,” Charmi posted on Twitter, soon after shooting the song. Kajal Aggarwal and Amala Paul have played the lead roles in this mass entertainer.V V Vinayak is directing the film and DVV Danayya is producing it. Thaman has composed the music and the album is already become a hit with Ram Charan’s fans. Ram Charan will be seen in dual roles in this film and the promotional campaign is going on in full swing. Naayak is expected to hit the screens on January 9, 2013.