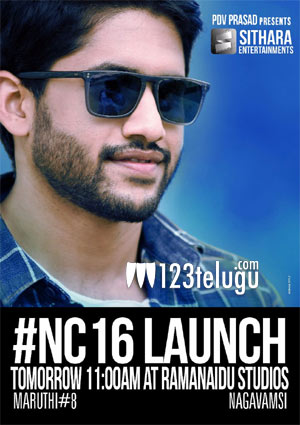 It’s been reported already that Naga Chaitanya will be acting in a film to be directed by romantic comedies specialist Maruthi. The Chay-Maruthi film has been titled Sailaja Reddy Alludu.

Now, the makers of this movie have announced that the formal launch of Sailaja Reddy Alludu will take place tomorrow at 11 am at Ramanaidu Studios. The film’s regular shooting will kick-start from January 5.

Anu Emmanuel is the film’s leading lady and​​ Ramya Krishna will essay a crucial role. Suryadevara Nagavamsi is going to produce the movie under Sithara Entertainments banner.