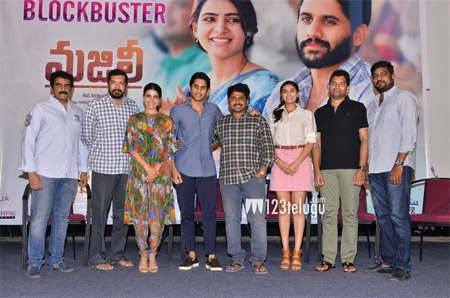 Star couple Naga Chaitanya and Samantha scored a super hit with their latest outing, Majili. This Shiva Nirvana directorial released to unanimous positive reviews on Friday and has collected a worldwide share of over Rs 13 crore in just 2 days.

To celebrate this grand success, Majili’s team today interacted with the media. Speaking at the event, Chay thanked the film’s director Shiva and fans for giving him a memorable film. “For me, Majili has been the most satisfying film as an actor. I’m thrilled to see audiences connecting to the scenes that I immensely liked when I first listened to the script” said Chay.

Samantha too thanked the fans for making Majili a hit. She said, “Majili was a very important film for us and I was quite nervous. I’m happy to see the kind of response the film has been getting. After Ye Maaya Chesave, Majili has turned out to be another memorable film for us.”