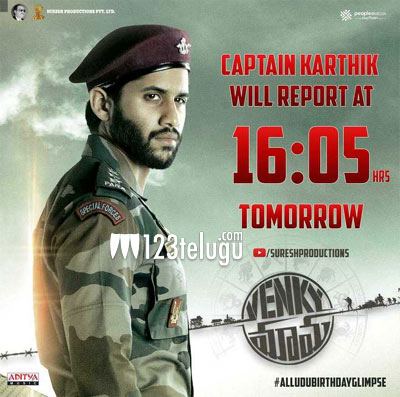 It’s been earlier reported that Naga Chaitanya will be playing a soldier in the Special Forces of the Indian Army in the much-awaited multi-starrer, Venky Mama. Chay will be seen sharing screen space with his uncle and senior hero Victory Venkatesh in the movie.

Chay celebrates his 33rd birthday tomorrow. On this occasion, Venky Mama’s makers will be unveiling a special video which will offer a few glimpses of Chay’s Captain Karthik’s role. The teaser will be out at 16:05 tomorrow. The teaser is expected to take the hype around the movie to the next level.

Raashi Khanna and Payal Rajput are the female leads in Venky Mama. This Bobby directorial is being produced by Suresh Babu and TG Viswaprasad. Thaman has composed the soundtrack.