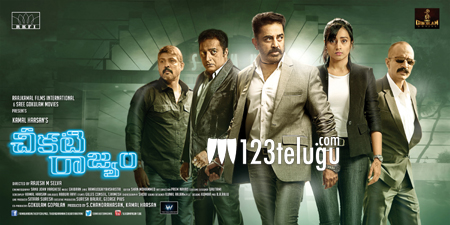 Kamal Haasan’s upcoming bilingual thriller, Cheekati Rajyam,is in its post production phase and is creating a lot of buzz. Speaking to the media today, Kamal revealed that they are planning to release the film during this Diwali in November.

Trisha Krishnan is the female lead in the film which also features Prakash Raj, Madhu Shalini, Sampath Raj and few others in crucial roles. Rajesh M Selva is the director and Raaj Kamal Films International is the production unit behind the project.