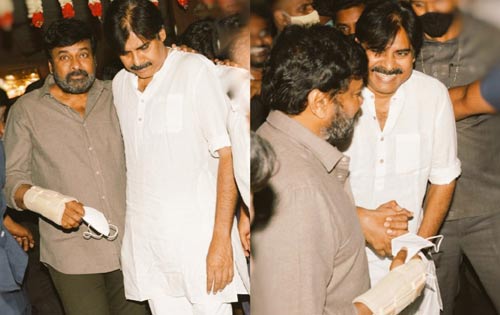 In a rare moment, Mega brothers, Chiranjeevi and Pawan Kalyan, bumped into each other at former Andhra Pradesh Deputy Speaker Mandali Buddha Prasad son’s wedding in Hyderabad. Pictures of Chiru and Pawan holding each other’s hands and bursting into smiles are going viral on social media. Both the Mega brothers spent some quality time together talking about each other’s wellbeing.

A lot was said and written about both Chiru and Pawan being at loggerheads following Pawan’s controversial statements against the YSRCP government. The Mega brothers again made headlines during the recently concluded MAA elections.