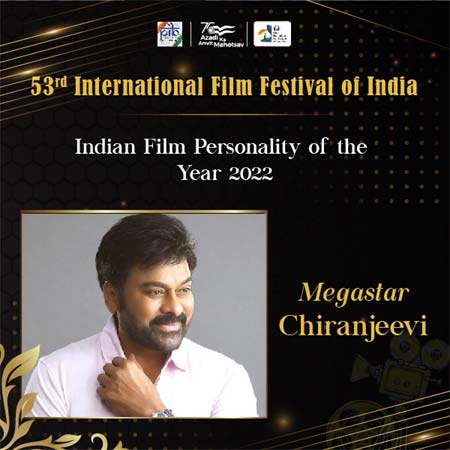 Megastar Chiranjeevi fans are ecstatic with the first single announcement from Waltair Veerayya. This would be the next release of the star actor after Godfather. The latest news would just take their delight to higher levels.

At the 53rd International Film Festival of India, the actor was conferred Indian Film Personality of the Year 2022. The central government declared the Award in the film festival conducted in Goa. This Award was instituted in 2013, as Indian cinema completed 100 years, and would be given to celebrities who make outstanding contributions to the growth and development of Indian cinema.

Amitabh Bachchan, Rajinikanth, Hema Malini, Ilaiyaraaja, and SP Balasubramanyam were among the others who were bestowed with this prestigious award before Chiranjeevi. For his invaluable contribution to the film industry through more than 150 films, Chiranjeevi has been honored with this award now.