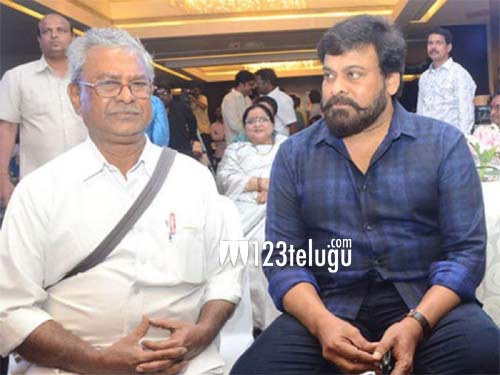 Earlier today, senior film journalist, Pasupuleti Rama Rao passed away due to age-related issues. The soft-spoken journalist was very close to many senior actors and has written many books on Telugu cinema.

Chiranjeevi, who shared a personal bond with ram Rao personally visited his family to pay his condolences today. Rama Rao had also written a book on Chiru named Chiranjeevitham.

Since morning several Tollywood celebs have been mourning Ram Rao’s death. He began his career in Vishalandra daily and went on to work in several film magazines. 123telugu conveys deep condolences to his family on their time of grief.

Child like and enthusiastic . There was always a certain innocent honesty about him .
Pasupuleti Ramarao gaaru 🙏🏼
Rest in peace sir pic.twitter.com/Mt7lbEH43U

Extremely saddened to learn about the demise of senior film journalist Pasupuleti Ramarao Garu. Extending my deepest condolences to his family

Really saddened by the loss of senior journalist Pasupuleti Ramarao garu. He first interviewed me for Pilla Nuvvu Leni Jeevitham and has since been a wellwisher who has never missed critiquing and praising my work at all times! He leaves a void that cannot be fulfilled. pic.twitter.com/8hxJSWKwCi

One of the most Sensible and genuine journalists …..we miss you Sir…. #RIP Pasupuleti Rama gaaru 🙏🙏🙏 pic.twitter.com/WiSei7wQLg

Shocked to hear about the sudden demise of senior journalist Pasupuleti Rama Rao Garu . Very humble , positive and a warm hearted person . The affectionate conversations we had togetherwill always be remembered .My condolences to the family . Will miss you sir ! RIP . pic.twitter.com/rR6VyCfNAu

My deepest condolences on the demise of Sri Pasupuleti Rama Rao garu 🙏🙏 He was an embodiment of passion and dedication. Rest In Peace Sir🙏🙏