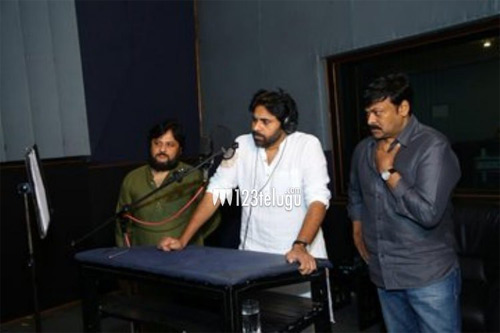 It was a sight to behold as mega brothers, Chiranjeevi and Pawan Kalyan joined hands for the teaser of Chiru’s highly-anticipated patriotic drama, Sye Raa. Recently, Pawan gave a voice-over for his elder brother’s prestigious biopic on the first Telugu freedom fighter Uyyalawada Narasimhareddy.

A few pictures of Pawan dubbing for the teaser have been released by Sye Raa makers, and what’s heartening to see is that Chiranjeevi was standing beside Pawan throughout, as the latter dubbed for the teaser in his trademark inspirational voice. Pawan’s voice-over will introduce Uyyalawada’s valor and legacy to the audience.

Sye Raa teaser will be launched on August 20. The film, directed by Surender Reddy and produced by Ram Charan, is slated to release on October 2.