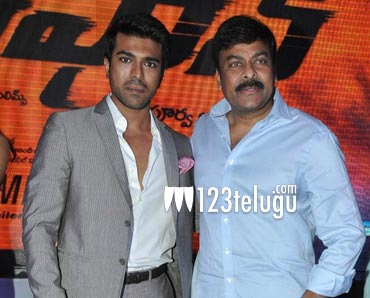 We have already reported that Megastar Chiranjeevi is doing a cameo in Ram Charan’s upcoming film, Bruce Lee. Directed by Srinu Vaitla, the film’s shoot is nearing completion and the makers have confirmed that it will hit the screens on October 16th.

As per the latest update, Chiranjeevi will join the unit on the 12th of this month to shoot for his scenes. Reportedly,he will feature in a song and a few action sequences alongside Ram Charan. Rakul Preet is playing the female lead in the film which is being produced by DVV Danayya. SS Thaman is the music director.